Food and the lockdown – how our shopping, eating and drinking habits are changing

News
Food and the lockdown – how our shopping, eating and drinking habits are changing 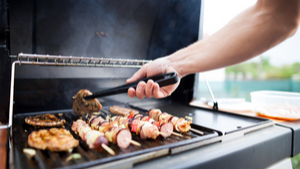 Now we’re well into the second month of lockdown, millions of us are continuing to work remotely while teaching children and looking after our health.

Considering we’re all spending more time at home, last month we shared some of our lockdown book, film and TV recommendations. This month, we’re looking at eating and drinking, as one further consequence of the lockdown is that family mealtimes are back in vogue.

Kantar Worldpanel have estimated that there will be 503 million more in-home meals eaten per week in this lockdown period – a rise of 38%. The research also found that ‘family favourite’ meals such as Italian, stews and those meals which are simple, hearty and comforting are the most popular during lockdown.

Have your eating or food shopping habits changed during lockdown? We asked the Altura team how their approach to food has changed in recent weeks.

With the government encouraging people to stay at home, shopping has become more organised while many food retailers have seen a huge spike in demand.

Rob says: “Our local butcher is so busy now you have to order days in advance. At the start of the week, we decide which meat to get for the weekend.

“My wife has found a local fishmonger who does the same, so we end up with a great roast and a fish dinner every weekend. The butcher also does great sausages, which our kids love, so recently I made toad-in-the-hole for the first time. Definitely a new family favourite!”

Peter is also shopping locally for food. “We have a fantastic local farm store, for all our fruit and veg twice a week,” he says.

“We generally buy similar items – including a pallet of bananas. I’m starting to think we have two monkeys as offspring (and not always just because of the levels of banana consumption).

“We normally get meat from a local farm stall and a nearby butcher. The butcher is the oldest in Surrey – they have been around since 1760, so they usually get it right!”

“Food has become a bit of an obsession”

A recent YouGov survey found that 38% of Brits – more than 19 million people – say they are cooking more from scratch.

Rob says: “As a family, we’ve always loved to cook. Now that all four of us are having every meal at home, and food shopping is that bit harder, we’ve had to become more organised. Indeed, food has become a bit of an obsession!”

“A couple of years ago I got a home pizza oven for my birthday. It’s a great alternative to a barbecue; we all love pizza and, with the extra time on our hands, making our own at home when the sun is shining is a lovely way to make and eat a family dinner together,” he adds.

Meanwhile, James is rediscovering a skill he hasn’t used for more than a quarter of a century. “Last time I cooked was 1994 – until now,” he says.

“I’m relearning lost skills and discovering a few new ones. It has to be said, I’d rather be learning to cook because I want to, rather than because I have to – but on balance I’m enjoying it.

“My biggest hit with the children – who are half-British, half-Chinese – is the timeless east-meets-west combo of bacon and rice. We also did dim sum steamed buns modified to look like a hedgehog family – although Amelia (age two) was a bit upset at the prospect of eating them. I’m also planning to do a roast at some point, probably a weekend job.”

Peter is a seasoned home cook and is a fan of al fresco dining. “The menu is mostly weather dependant,” he adds. “If the sun is shining there is no question cooking will be outside, either on the braii or using the skillet on the outdoor gas burner.”

Some old favourites which Peter has cooked recently include:

…and some new experiments:

“Wine consumption is up!”

Peter is firmly in the first camp: “Wine consumption is up around here! Found a great red a couple years ago at Waitrose, which we mostly drink – Terre di Faiano Organic Primitivo – delicious and great value.

“Hot days will be an ice-cold Pale Ale and a G&T – or I sometimes push the boat out and have a few Cuba Libre’s (with Coke Zero) to remind me of the days in Cuba without children, confinement and responsibilities. All three send you a thumping reminder the next morning though…”

If you like a drop of wine, James recommends a Fleur Cardinale 2003. “It was a very hot summer in 2003, so the grapes ripened early with a high sugar content, and therefore higher alcohol and a longer maturity profile,” he says. “It was very nice straight out of the bottle and went well with crispy duck.

“Next on my hit list (waiting for Isabelle to share with me, but she’s not a big drinker) is a Chateau Les Gravières 2009 – indisputably a great year, and I am told a pretty good winemaker. It’s sitting under my desk, whispering to me.”

Rob is managing to combine his love of cocktails with supporting a local business, as he explains: “A nearby deli has roped in a local cocktail barman with time on his hands to make bottles of pre-mixed cocktails.

“Our favourite is their Old Fashioned – my favourite cocktail anyway – and, as we’ve discovered recently, it goes surprisingly well with pizza in the sunshine!”

Positive changes to the daily routine

The lockdown has also reduced the commuting time for many workers, resulting in positive changes to their daily routine.

James says: “As a family, we’ve started eating earlier in the evening, probably because no one is waiting for me to get home from the office. This is a routine that we’ll probably aim to maintain, as it naturally leads to an earlier bedtime for the children, which means more chillax time for me and Isabelle.

“We’re also using this stuck-at-home scenario to try to domesticate the children. We’ve got them ‘helping’ in the kitchen. Mixed results, to be honest. We probably need to top up the first aid kit…”

There will be a fee for mortgage advice. The precise amount will depend upon your circumstances but a typical fee will be £500.

A summary of our internal complaints handling procedures for the reasonable and prompt handling of complaints is available on request and if you cannot settle your complaint with us, you may be entitled to refer it to the Financial Ombudsman Service at www.financial-ombudsman.org.uk or by contacting them on 0800 023 4 567.