Does the forecast for interest rates mean it’s time to consider a long-term fixed rate?

News
Does the forecast for interest rates mean it’s time to consider a long-term fixed rate? 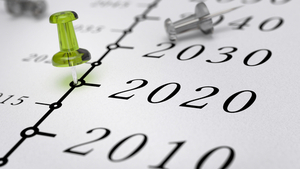 Earlier this year, many commentators were expecting the Bank of England to increase the Base rate. A decisive General Election result had seen confidence return to the economy, and it looked likely that the next rate move was up.

However, the coronavirus crisis has been a huge economic shock. The Base rate was cut twice in March and now sits at just 0.1% – its lowest level in the Bank’s 324-year history.

What’s the outlook for interest rates?

With UK inflation tumbling to just 0.5%, unemployment rocketing and the UK economy heading for a deep recession, the Bank of England is using all means at its disposal to support the country through the crisis.

Interest rates have been cut to 0.1%, and there is strong speculation that they could be cut to zero, or even enter negative territory, over the next few months. Swap rates have already signalled that rates could fall further over the next year.

At his most recent press conference, Governor of the Bank of England, Andrew Bailey, said that negative interest rates remained an option but stressed there was no reason to expect them to be introduced imminently.

The cut in interest rates has fed through to mortgage products, as this table shows:

So, with mortgage rates having fallen, is it time to lock in at these levels for the long term?

The pros and cons of a long-term fixed rate

Historically, borrowers have tended to prefer shorter-term fixed-rate deals as they offer low rates and the flexibility to review your options in the future.

However, in recent years, there has been a trend towards fixing for the longer term – for seven or even 10 years.

Just last month, Barclays reduced the price of their ten-year fixed deal to just 1.99%, for borrowers with a 40% deposit.

Eleanor Williams from Moneyfacts says: “For those with the required 40% equity or deposit, this could provide some much-needed certainty and peace of mind as to what their monthly mortgage repayment would be for the long term.”

Lock in at a low rate

This is one of the key reasons for choosing a long-term fix. You can lock in at a low interest rate and ensure that your repayments won’t change for a decade, even if interest rates start rising during that period.

However, Williams also sounds a note of caution. She says: “[A long-term fixed rate] would provide stability and protection from potential interest rate volatility moving forwards, but borrowers would need to be comfortable that they have carefully considered their circumstances and future plans would lend themselves to locking into a deal for this length of time.”

It’s this final point that is the key issue if you’re considering committing to a long-term fixed deal.

If you’re thinking of fixing your mortgage for ten years, then you’ll almost certainly be faced with early repayment charges if you pay off some or all of your mortgage during that time.

It means that committing to a decade-long deal can be restrictive if your circumstances change. It means you’d face charges if you wanted to pay a significant lump sum off your mortgage during your fixed- rate, you wanted to switch to a better deal, or you wanted to get a different loan to borrow more or move house before the end of the term.

At the very least, if you think your circumstances may change in the next ten years, you should ensure that your mortgage rate is ‘portable’, meaning that you can transfer it onto your new mortgage when you move.

Bear in mind that it won’t always be possible to ‘port’ your mortgage. When you move home, you essentially apply for a new mortgage and will have to go through your lender’s normal underwriting process.

If your circumstances are not the same as when you took out the original mortgage – or the lender’s criteria have changed – you may find your lender will no longer approve your mortgage.

Credit problems, missed payments, or the fact you need a bigger mortgage may also be reasons why your lender won’t let you ‘port’ your deal – and then you could have significant early repayment charges to pay.

Could a short-term deal be cheaper?

The other factor to consider is that short-term fixed-rate deals tend to be cheaper. As we saw earlier, it’s around 25 basis points cheaper to fix for two years than it is for five years which, on a substantial mortgage, can amount to a significant saving.

A shorter-term deal also gives you the flexibility to change your mortgage as your circumstances change. A lot can happen in a decade – you could get married, have children, change jobs multiple times, inherit money or move overseas. So, the flexibility to make changes as and when you need to, coupled with lower initial interest rates, could swing the balance in favour of a shorter-term deal.

If you’re considering a fixed-rate deal, get in touch. We can give you advice on the best option for you based on your needs and circumstances and search the market for a great deal.